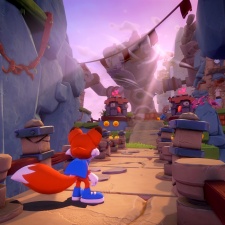 Texas-based game developer Playful Studios has announced that a number of staff are being made redundant.

In a post on the developer's website, founders Paul Bettner and Katy Drake Bettner wrote that the company is going to be changing how it approaches games development and has decided to make production "more streamlined" and "distributed," which sounds like more freelance staff working from home – but that's just speculation on our part.

"As part of this transition in our operating model, we have made the incredibly difficult decision to significantly reduce our full-time staff, effective today," the founders wrote.

"We are truly heartbroken to be parting ways with many of our friends and colleagues. These are people who have poured their hearts into every game Playful has created, who have supported us and each other every step of the way, and have truly made this studio what it is today. We will be working closely with each person affected by this transition to help them move forward."

At the time of writing, Playful has 58 employees on LinkedIn – though an earlier story by GamesIndustry.biz noted that the studio had 76 members of staff as per the job-based social network so it looks like the developer's roster is already dropping.