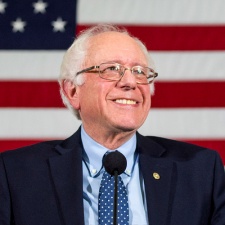 Taking to Twitter (below), the Democratic Senator said that those making video games should reap the rewards of their work, citing an article on Time.com about burnout in the games industry. Last year, the US games industry saw a record $43.4bn in consumer spending according to US video games trade body The Entertainment Software Association (ESA).

Sanders said that those responsible for making those games should have collective bargaining, with the Vermont politician calling out the International Alliance of Theatrical Stage Employees and Game Workers Unite unions.

The video game industry made $43 billion in revenue last year. The workers responsible for that profit deserve to collectively bargain as part of a union. I'm glad to see unions like @IATSE and the broader @GameWorkers movement organizing such workers. https://t.co/Ia5gMG2v0w

Unionisation has been a hot topic in the games industry for years now but the demand for collective bargaining has heated up in the last few years. The high-profile and incredibly messy implosion at California's Telltale Games last September turned heads, for one. Developers from around the world put their heads above the parapets in the wake of The Walking Dead's closure with the #AsAGamesWorker hashtag, sharing their stories and demands from the industry.

Game Workers Unite was founded around GDC 2018. The UK branch is an officially-recognised union now, too, being incorporated into gig economy body Independent Workers of Great Britain.

The fact that CEOs such as Activision Blizzard's Robert Kotick and Andrew Wilson from EA being compensated a massively disproportionate amount versus the median salary of their staff - 319:1 and 371:1 respectively - hasn't helped matters, either.

Sanders ran in the 2016 US presidential election, losing out to Hillary Clinton during the Primaries. In February 2019, he announced that he was running as a Democratic candidate for the 2020 presidential race.