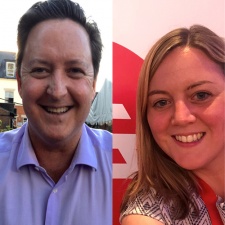 Update: EA has confirmed to PCGamesInsider.biz that Shaun Campbell (right) is leaving his role as UK and Ireland country manager.

The publishing giant says Campbell is moving into a new role in the company, which is currently unspecified. Meanwhile, UK and Ireland sales boss Samantha Ebelthite (far right) is taking on Campbell's role.

Ebelthite joined EA in February 2018 as head of sales for the UK and Ireland. Before that, she spent 11 years working at pharmaceutical giant GSK, first as a national account manager between 2007 and 2015, then as a category controller.

According to the firm's filing history on Companies House, Campbell's role as a director at EA was terminated on June 6th, 2019. 'Terminated' here doesn't mean he has been fired, but that he has stepped out of a director role.

It's not clear whether Campbell has left EA as a whole or if he's just stepped down from the UK side of things. Nor do we know who will replace Campbell in the top job.

This is the latest blow to Electronic Arts' UK operation. In June 2017, the firm cut its British PR and marketing team significantly as part of its plan to have an international marketing hub based out of its European headquarters in Geneva. Campbell taking on a role at EA's European head office isn't out of the question, of course.

Campbell is a 15-and-a-half-year vet of EA, joining as a sales director back in 2004. He held that role for almost five years, moving to be a European category management director in August 2008 before rising to head up the publishing giant's Nordic operation in Stockholm. He held this role for over four years before moving to the UK and Ireland Country Manager role in October 2014.