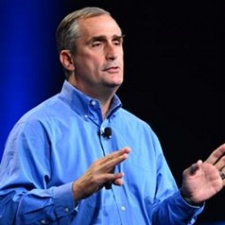 An internal investigation determined that Krzanich had a consensual relationship with an Intel employee. Company policy forbids “fraternisation”, and this extends to the highest levels of management.

"Given the expectation that all employees will respect Intel's values and adhere to the company's code of conduct, the board has accepted Mr. Krzanich's resignation," said Intel in a statement.

The parting appears to be on good terms, with Intel management leaving Krzanich in good spirits. He is succeeded as CEO in the interim by CFO Robert Swan, effective immediately.

"The board believes strongly in Intel's strategy and we are confident in Bob Swan's ability to lead the company as we conduct a robust search for our next CEO," said Intel chairman Andy Bryant. "Bob has been instrumental to the development and execution of Intel's strategy, and we know the company will continue to smoothly execute. We appreciate Brian's many contributions to Intel.”

Intel evidently takes this “non-fraternization” policy seriously - Krzanich’s resignation displays a commitment to enforcing the rule at all levels.

Shares in Intel dropped two percent following the news. This is after the company's stock took a hit after shareholders raised concerns over its political contributions.

Intel: Cloud tech will expand what games can be made and how many people are playing them