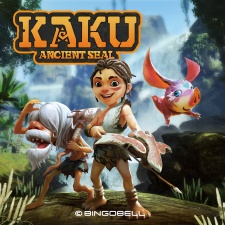 Today, we're speaking to Nego Lin from Bingobell, who submitted Kaku Ancient Seal to The Big Indie Pitch (PC+Console Edition) at GIC in Poznan 2019 and walked away as the winner.

Nego Lin: We are Bingobell from Shenzhen, China. We were founded in 2016. Most of our team members are very young. Kaku: Ancient Seal is a semi-open world ARPG game that features a separate universe worldview. We designed it to be universal and easy to understand for players across the world, regardless of their age and culture.

What do you think are the most unique and interesting aspects of Kaku: Ancient Seal that gamers may never have seen before?

Kaku: Ancient Seal is developed with Unreal Engine 4, and combines 3D cartoon characters with realistic scenes to provide both a novel and impressive visual performance that will appeal to both casual and hardcore players.

In the early stages of development, our goal was to make content and characters that will endure as a brand. Therefore, the team designed the game to be rich in plot, to make it interesting and positive, and for each character to have their own personality and emotions. We want players to not only have a fun experience playing the game, but to also be both immersed in the world we created, and to explore the vast story behind it. For this reason, the team also sought writers, comic book creators, animators and other relevant people for consultation, so that Kaku’s story could be made even more impressive.

What was the most challenging aspect of developing Kaku: Ancient Seal?

For the team, the work of game editing and art is particularly heavy, and the technical difficulties are always difficult to solve. Although the world map construction is basically completed, a large number of subsequent testing of map bugs is very challenging for the team. How best to enrich such a world is something we are still exploring.

Can you tell us a little more about Kaku's themes and your inspirations for making it?

Kaku: Ancient Seal is a fun, fantasy, action game in which players take a teenage adventurer, and his pet, on a journey through a world of ancient fantasy. The ancient continent is made up of five tectonic plates: the remains of floating islands filled with mystery, hot dense forests, treacherous muddy moors, steep weathered plateaus, and a vast desert. Because in the world view of the game the original entire continent was torn apart by the War of the Ancients, each continent is independent and can be explored without loading, but the continents are not seamlessly linked and need to be teleported to reach, so the team called it "semi-open".

What aspect of Kaku are you most proud of?

Player feedback was generally good during testing. What players tend to mention more is the rationality of the gameplay and suggestions for future optimization. Currently, the recommendation rate is relatively high, which makes us feel that the work we have done is indeed meaningful.

For indie developers or small teams, the question often arises: Will anyone really enjoy playing my game? What if no one plays the game? Problems like these can bring a lot of stress and anxiety, and a lot of developers will give up, which is a shame. Another problem is income. In the development stage of the game, it is difficult for developers to get income. The whole development process is basically at a stage of capital-output. It's common in the game industry that even though the quality of the game itself is good, you don't have enough money to promote the game and the sales of the game fall short of your expectations.

Are there any tips and advice you would give to an independent developer out there who are just
starting out?

First of all, you have to know what type of game you're good at, and then you have to use the skills that you're good at to maximize them, rather than just doing what's hot in the market right now. This often ends up costing more than the monetary expense.

Moreover, don't be overambitious with your goals in the beginning. Start with goals that you know you can achieve and the results will show. Aim to work carefully and don't put too much pressure on yourself.

Finally, stay true to the mission and choose a direction and goal, then move forward bravely and firmly. There will be doubts or bad things around you, but as long as you move forward, you will reach the destination.

We weren’t sure what to expect as it was our first time participating in the competition. But, we are in the spirit of learning and seeking advice, so we participated in order to hear the judge’s opinion of our work and the game experience, as well as our previous development work. When the host finally said: “BINGOBELL!”, we were very surprised, of course. It was more of a surprise because it was an affirmation for our persistence over the years, and our teammates were all jubilant when they knew they had won the contest! I am very grateful to the organizer for providing us game developers with such a great opportunity to exchange and learn!

This experience is very important for me personally and even for the whole team. It is an affirmation and inspiration for our work during this period of time, and it enables us to complete our game with more enthusiasm. We were also able to see so many other good games at the same time, which provided inspiration for our own development. During the exhibition, the feedback from players on our game also made it clear to us that our game had some shortcomings. If anything, we hope to communicate with more international game publishers so that more players can know and like our game Kaku: Ancient Seal.

Kaku: Ancient Seal is expected to go live on Steam, in 2021. We hope that the game will find a fanbase, and we’ll continue supporting it with improvements and updates. When the time is right, we will set up new projects. The Kaku IP will continue, but we will have different kinds of new games too.