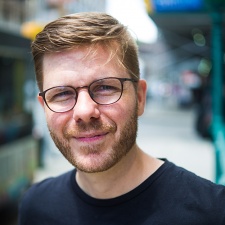 Back in 1999, a group of Icelandic developers had an ambitious dream for a new video game.

The team at CCP wanted to make an unpredictable world, inspired by video and role-playing games from the ‘80s and 90s such as Magic and Ultima Online, while also making the most of new advances in technology.

“EVE was born at the nexus of a few enabling technologies and ideas,” says 18-year CCP vet Torfi Frans Ólafsson. Currently, he holds the role of senior director of business development, but he began at the company as lead 3d artist on Eve Online before rising through the ranks, taking on lead artist, senior producer and creative director roles.

“On the technical side, broadband internet was finally starting to take off, so were hardware graphics accelerators. Neither were ubiquitous though back in 1999, but that’s where we thought we were headed. At the same Ultima Online showed the tremendous potential of creating accessible interfaces to the concept of Multi User Dungeons, previously only available on university mainframes. Ultima and MUDs were unlike modern MMOs in the sense that they were tremendously open.

“Thus the narrative was emergent and very unpredictable. EVE’s original designers went really deep and really dark in Ultima, and emerged with the idea that for good to exist, you must allow evil to thrive. For value to exist, you must have scarcity and effort. And for a community to be truly meaningful, it mustn’t be fragmented. So with the inspiration of playing Elite in the 80’s, Magic The Gathering and Ultima Online, the concept of EVE Online was born.”

“There were strong Icelandic influences,” Just as the original settlers of Iceland struggled to survive in a harsh, unforgiving, and lawless environment, so too did the capsuleers of EVE have to fear for their lives and realise that every jump between solar systems they made could lead to certain death. EVE has grown a lot since then, with ideas and influences from various other places, but the core of it is the same. The best stories are those created by players simply acting out the mechanics of the game – if you keep your universe open enough.”

Despite all the hard work that CCP put into the initial release, by Ólafsson’s own admission, Eve Online didn’t have the best launch.

“The game launched kind of half-baked. It was very buggy, the gameplay was somewhat limited, and there was almost no on-boarding to speak of,” he says.

“It´s first time user experience was as hostile as the world EVE tries to represent. Once determined players were through that gruesome gauntlet of learning the game, they were faced with scaling issues and some of the most innovative meta-gaming and exploits we had seen.

“A big part of our development post-launch had to do with plugging those holes. Optimising server code, upgrading hardware, and plugging the leaks in the economy and game systems, where smart, determined players were able to figure out obscure ways of gameplay to extract value from the system and inflict punishment on their foes.”

Maybe as a result of this, the game wasn’t an instant success. In fact, it seems that it didn’t even meet CCP’s own expectations.

“We certainly didn´t expect the game to be as big as it is 14 years later,” Ólafsson says.

“We expected a big spike, and then that it would trail off in a few years time. First off, the spike never happened. EVE did not become successful immediately. This was a shock, but thanks to the perseverance of a few people on the team such as our CEO Hilmar, we didn’t give up but soldiered on. As a result, I think, EVE succeeded way beyond original plans and has survived way longer than expected.”

Indeed, while EVE started out as a game, it has spawned spin-offs games, novels and even its own convention. But perhaps the most interesting thing to come out of Eve Online is its own internal government.

Dubbed the ‘Council of Stellar Management’, this is an elected group of players that come together to help shape the game and liase with CCP.

“Most multiplayer game communities seek advice from prolific or advanced players in one way or another. Traditionally in MMOs, those would be hand-picked by community managers and consulted with on potentially controversial issues and given a glimpse into the developer´s plans,” Ólafsson explains.

“Over the years, we had a few dramatic incidents which created a rift between the player base and the developers and we felt that using a group of hand-picked favourites wasn´t being effective. It also ties into the fact that EVE is a community which is no longer a small village but grown to the size of a fully fledged city or small country.

“Thus it was logical to have elected officials rather than some chosen by the developers. We’ve gone through several iterations, but more and more the Council of Stellar Management or CSM for short, are involved with providing feedback, insight and ideas that are invaluable to our roadmap and staying in touch with the people who live in the EVE Universe.”

The way a relationship and dialogue has formed between CCP and Eve Online’s fanbase is one of the most influential aspects from the game’s 14-year history.

“EVE is best known for its emergent narrative and proving that a close symbiotic relationship between developers and players is healthy and the right way forward if you want to build a world to last,” Ólafsson explains.

“Open worlds are risky and the model is not commonly replicated because it´s easy to get it wrong.”

“Still I hope that we´ve been a positive influence on the craft of game development, inspiring more worlds to be open ended with more power given to players in future multiplayer games as a result of EVE showing that it´s possible.”

But, ultimately, Ólafsson says that while his proudest moments with Eve were initially tied to the game, the longer he has worked on it, the more pride he feels about the human relationships formed beyond the screen.

“Initially, my proudest moments were tied to technology or art. Like the character creation system, the in-game infographics, and other pretty graphics. Or launching particular expansions and seeing new users graphs go through the roof,” he says.

“But as the game has evolved, it´s taken on a way more human face. Despite the alleged acrimonious atmosphere, the EVE community often acts as a tight-knit family. You can see it clearly when bitter enemies meet in real life at events such as the annual EVE Fanfest in Reykjavik, Iceland. There are hugs, laughter and brotherly love between people who fight for years on the stellar battlefield.

“And when in life tragedies have happened such as deaths or contracted diseases, the community has come together, supported bereaved families, and honoured their fallen in ways that you would expect to see in professions like police, firemen or armed services, where shared struggle creates a unique kinship between people who otherwise would not have given each other notice.

“Having been part of building the universe that allowed that to happen is what makes me most proud.”