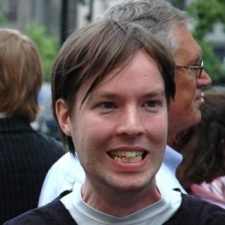 A founding member of Starbreeze Studios in 1998, Jens Andersson decided to move to indie games in 2010.

Having previously worked on such titles as the Chronicles of Riddick series and The Darkness at Starbreeze, his first indie venture was the studio Collecting Smiles; through which he created and released Colors! 3D for the 3DS. In July 2013, Andersson partnered with fellow former Starbreeze employee, Mattias Snygg, and formed Villa Gorilla.

“We founded Villa Gorilla about four years ago with the idea of making indie-style games,” says Andersson. “Innovative ideas with beautiful execution.”

Villa Gorilla has been working on its debut game, titled Yoku’s Island Express, a physics-based side-scroller which Andersson describes as a “pinball adventure”. The playable character is Yoku the dung beetle, who has started to work for an island’s postal service.

“Physics is fun,” says Andersson, and he cites Half-Life 2 and Angry Birds as examples of physics-based games that exemplify this.

“Doing physical-based gameplay is always really rewarding because it's something inherently fun about playing around with [it]; and I do think that pinball mechanics are underused as a mechanic in video games.”

The Villa Gorilla team began considering how to implement pinball mechanics in its game.
“What happens when you start linking flippers together in a larger area than just a single pinball table?”

Andersson says that they joked: “‘Hey, maybe this is an open-world game!'” But that: “When we saw that people reacted so positively when we talked about that, we started thinking about it properly and then we just went for it.”

“What happens when you start linking flippers together in a larger area than just a single pinball table?”

Yoku’s Island Express is an expansive, side-scrolling 2D game. In contemporary gaming, an ‘open-world’ is often taken to mean a vast, traversable 3D environment, as in games like GTA V or Fallout 4, for example. However, there is a well-documented history of 'open-world' 2D games in the metroidvania genre.

“Open-world is a very flexible term. … For me, open-world basically means that you have a world and you're free to roam around in it as you want. Design-wise, our game is really a metroidvania, so we're using the open-world term with that disclaimer.”

“Open-world is a very flexible term.”

“Metroidvania, for our game, means you have this world, you can move around in it, but you do unlock additional power-ups and abilities so you can back-track and unlock new areas and expand your access throughout the world.”

There has been a flurry of new and successful metroidvania indie games released this decade. Guacamelee! by DrinkBox Studios, Moon Studios-developed Ori and the Blind Forest, Thomas Happ Games’ Axiom Verge and this year’s Hollow Knight by Team Cherry, all fall into this category.

“The whole indie wave has helped reinvent what the metroidvania is,” says Andersson. “Today, we see that those ideas, depending on what you read into the term metroidvania, applied in Dark Souls. … You could totally claim that that's a metroidvania, I would; but it doesn't look like a metroidvania.”

For the release of Yoku’s Island Express, Villa Gorilla partnered with publisher Team17. This may not always have been the dev’s intention.

“It wasn't a given that we would go with a publisher,” clarifying that: “It was important for us to be able to self-fund, at least.” His experiences self-promoting and self-publishing Colors! 3D ultimately put him off repeating that process.

“I did everything. That was pretty much a one-man project,” he says. “I did outsourcing on some of the art and stuff like that, but I did the development, I did the publishing, I did the PR and, honestly, I didn't really enjoy that part of it. It went really well but I'd rather focus on the development, so that was always in the back of my mind when we worked on this game, that, wouldn't it be nice to have someone.”

Andersson doesn't say whether Team17 part-funded Yoku’s Island Express, but does say instead that working with the publisher has let his company launch on multiple platforms simultaneously.

The game is set to release in 2018. Andersson notes that the sales figures don’t need to be equivalent to triple-A titles for it to be successful: “We've been keeping the budget really low, so we don't need to do really large numbers. It's nothing compared to triple-A and that's also the beauty of making indie games; a success is easier in that space.”