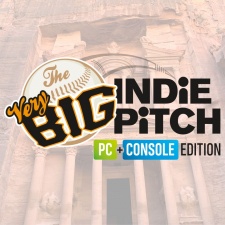 At the end of last year, Wild Thieves by Monupon won the Very Big Indie Pitch: PC + Console Edition prize at Pocket Gamer Connects Jordan 2019. Hailing from Saudi Arabia (but with team members in Canada too), Monupon’s Nasir Assaf joined the competition in Amman, Jordan, and swept to victory after half a day of pitching.

You can read more about Wild Thieves and its competitors below. The Very Big Indie Pitch ran on the second day of PG Connects Jordan 2019, which was our first two-day conference in the country. PCGamesInsider.biz and our Big Indie Pitch competition have taken part in the Jordan Gaming Summit before, but in November last year we held our first full Connects conference in the region.

And with it came the first Very Big version of our indie competition in the Middle East, accepting entries from PC developers as well as mobile. There were seven non-mobile entries in total, by developers in the MENA region and beyond. The quality of entries was very high – the judges enjoyed all the projects they saw; selecting winners was very difficult.

1/ FIRST PLACE:
Wild Thieves by Monupon
“Loved it. My favourite,” said one of the judges instantly. This polished title from a team in Riyadh has a simple concept, with great animation and character design.

Described as a “rhythmic robbery action game”, it’s set in a hyper-capitalist age where one company rules the world until the Thief Academy challenges that status quo. Featuring a 2D movement format and a unique cover system, you take on 10 levels either by yourself or with up to three other players. It also boasts an original soundtrack from the producer behind Forty Thieves Orkestar, Aidan Love.

2/ SECOND PLACE:
Sticks And Bones by Mohammad Arkobi
Another title from Saudi Arabia, Sticks And Bones is an interactive short story with quicktime events and multiple types of situation-specific game mechanics (switching from third person to 2D as needed).

Described by the judges as “a fully-fledged adventure game,” it was also praised for its humour.

Congratulations to our two top teams, and to all our entrants: they were all really good pitches. The teams received feedback from the judges and we look forward to seeing them again next year. We also conducted a mobile edition of the Very Big Indie Pitch in Jordan, with the three winners there being Hako Games, Sakura Games and Murad Sheshani.

We run pitching competitions like this about 20 times a year, all around the world. It's a chance for small teams to present their in-progress projects to a panel of press, publishers and industry experts. Teams get feedback, make new contacts, and maybe win a prize. This one was sponsored by our season partner G-STAR, plus sponsors Kwalee and Plug In Digital. In previous years the Very Big Indie Pitch events have focussed on mobile games, but PC and console projects are now a regular part of the mix.

You can sign up for other Big Indie Pitches (and be in with a shot at prizes, promotional spend, and press coverage) at www.bigindiepitch.com. The next opportunity will be in San Francisco in March, alongside GDC. We’ll be back in Jordan later in 2020.