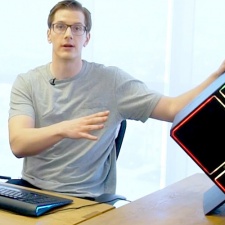 Announced at the end of 2014, Omen was tech giant HP's foray into the world of hardcore games. The firm's first product was a super thin laptop that impressed gamers when it came out in mid-2015, but failed to win over the hardcore crowd that the firm was targeting.

"The first thing we launched was a premium gaming notebook. It was thin and light. At the time it had a GTX 960. People really liked it, but when you went to game developers and people involved in esports and asking them they wanted to do a sponsor deal, they were like: 'No, we don't want to game on a Nvidia 960M, do you have something like a 980ti? '," John Ludwig, Omen by HP product manager, says.

"That was a funny learning for the first year. We launched with a thin and light product and esports didn't want it. These esports players want 144Hz display but they need five-times the frames they have as the refresh rate for their monitor. They need beefy computers. The average gamer really liked our first notebook but for the super fans and the esports players, it's a whole different sector."

That wasn't the only learning that Omen took away from its first few years in the market.

"When we first started Omen, we had one or two gamers working on it," Ludwig says.

"We had ancillary things, the marketers and the people working on the website and the people doing the press. They had been at HP and now they were adding another product line. They had to learn what GeForce is. They've been working at HP for 20 years and this is a totally different market. One of the things we definitely learnt in 2014 is that everyone has to be a gamer to work in games. There are just things you don't pick up. In ten years, everyone is going to have this common knowledge.

"One thing we have done is have the entire chain of people working on games at HP being gamers. That's the one thing we learnt. It's been quite a three-and-a-half-year journey. We are all surprised by how well it has done. I don't think anyone thought when we started out that we'd end up sponsoring a whole entire esports league in just two years."

Indeed, Omen is one of the hardline partners for the Overwatch League, having already provided its Omen X hardware to the 2017 Overwatch World Cup. Ludwig isn't able to say whether this sponsorship deal has yielded a boost in sales, but the brand awareness is more important.

"We haven't done the maths just yet to see whether we've seen sales from the Overwatch League sponsorship," he says.

"Certainly seeing the name out there is good. We're such a young brand, the growth is so quick that it's hard to actually go find what the catalyst for growth has been because there's been a lot of catalysts right now even though we just started this three and a half years ago, and we really started in earnest two years ago. In our first year, we just launched a high-end notebook. Now, in the last year, we have a full line-up of mice, keyboard, headphones, desktops, notebooks, displays, and so on [below]."

Having your name next to the best Overwatch players in the world is certainly good for brand awareness, but when said players are also getting in trouble for homophobia and racism - as has been the case with some top pro-gamers involved in the Overwatch League - that can make advertisers nervous.

"Of course it makes us nervous," Ludwig says.

"Every sponsor gets nervous whether it's professional athletes to esports players. Everyone always gets nervous. We don't condone it all. But a lot of these players are kids, very young, and there are going to be growing pains. Compared to sponsoring something that's been around for a long time, there's going to be a difference. Again, these are kids, a lot of them are 18 and 19. They haven't learnt maybe some of the things they should know. Internet culture is a bit of a mess also. You see this stuff with professional athletes, too. Across HP, we sponsor a lot of different things. This stuff is always an issue. The best we can do is education. People get suspended and learn from it then don't do it again."

One of the hottest issues facing the PC games hardware market right now is the boom in cryptocurrency mining. This has seen the demand for - and the price of - GPUs soaring. This is a mixed bag for an OEM like HP; on the one hand their prebuilt computers might be more appealing price-wise for consumers. But they, too, need to be buying GPUs for their machines.

"Two years ago, there was no question that building yourself was cheaper, which makes sense," Ludwig says.

"You don't get a warranty, someone might have had to build it for you, someone had to ship it all. Now the opposite is true; the OEM deals are better as we have long-term contracts so we're not as affected by supply and demand from all this cryptocurrency boom. We are still affected by it and the price is really high across the board. It's more of a blip to be honest, but that's pure conjecture from me. I have no idea on the future of cryptocurrency. It's not cheap. It's weird right now. Part of the fun of PC gaming is the build-it-yourself culture, the upgradability. Personally, this all makes our prices look better but at the same time it hurts PC gaming overall. In general, I'd rather have prices go back to normal and have the status quo return because that's just healthier in general for PC. Even if this blip is good for HP."

Omen by HP has already firmly established itself as a games brand; deals like the Overwatch sponsorship have been a big part in that. But looking forwards, Ludwig wants the continue to convince consumers that it is for real and this isn't just a cash grab by another tech firm.

"The thing we are hoping for is that the Overwatch League continues to go great and people keep seeing our computers and displays doing great on the Overwatch League," he says. "We want to be seen as a company that helps your performance, that we're a performance brand, not just another random OEM that's jumped into gaming. There's been a lot of activity over the past couple years with people jumping into games; people want to be involved. We don't want to be seen as someone going for a money grab, jumping into the market, but actually a company that's passionate about gaming and esports in general."