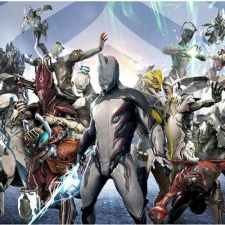 That's according to Bloomberg, which reports that the former - which is backed by Chinese giant Tencent - is looking to snap up the latter for a cool $1.4bn. IDreamSky is on the hunt for co-investors to help fund such a deal. Credit Suisse is working on the deal, apparently.

Leyou is a holding company in the games industry that owns Warframe (pictured) maker Digital Extremes as well as Splash Damage of Brink and Dirty Bomb fame. Amusingly it actually started out primarily as a chicken meat supplier called Sumpo Food Holdings, before moving into the games business in October 2014 with the purchase of Digital Extremes.

In 2015, it rebranded as Leyou Technologies Holdings and sold its chicken business in August 2016 to focus on its new-found games success. In August of this year, Leyou backed LCG Entertainment, the company which owns the assets left in the remains of The Walking Dead firm Telltale following its implosion during 2018.