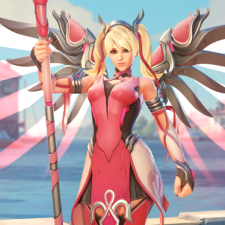 Blizzard has announced that its campaign to raise money for Breast Cancer Research Foundation hit a massive $12.7m.

The publisher and developer revealed the milestone via Twitter (below), saying that this is the single largest donation from a corporate partner that the BCRF had ever received. This money was raised through sales of a pink Mercy skin and a T-shirt.

More than $10m of that figure came directly from the Mercy skin.

In addition to the above Blizzard says that $130,000 was raised via donations from 14 Overwatch streamers' audiences.

This campaign kicked off on May 8th, 2018, and continued through to May 21st.

"Thanks to the overwhelming generosity of the Overwatch community during the Pink Mercy charity campaign, we’ve raised more than $12.7 million (USD) to support the Breast Cancer Research Foundation," the company wrote.

"This is the largest donation by a corporate partner within one year in BCRF’s 25-year history, and it’s all because of you."

Blizzard continued: "Once again, you’ve dared to see what the world could be and have help take a significant step forward in the mission to cure breast cancer.

Together, we have raised over $12.7 million (USD) for @BCRFcure