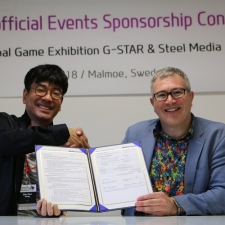 After a successful 2017, Steel Media, publisher of the Pocket Gamer brand, and G-STAR, the world-famous South Korean gaming event have expanded their partnership for 2018. The renewed and extended collaboration includes the hosting of the world-famous Big Indie Awards in Busan in November, and a series of live events throughout the year.

This is the second year of a huge media partnership which sees Steel Media and G-STAR support and promote each other, to grow their respective audiences around the world. The new agreement establishes G-STAR as season partner for the Big Indie Pitch events through 2018.

The Big Indie Pitch is a series of international competitions where small teams of games developers present their in-progress games to a panel of publishers, press, experts and investors. The first G-STAR-supported Big Indie Pitch will take place during July’s Big Indie Fest @ Reversed in Vienna.

The two companies will partner to bring an evening of incredible international networking to Gamescom, August 21-25, in Cologne, Germany, which will feature a Big Indie Pitch, panel and party. As well as sessions in Los Angeles, Brighton and Helsinki during the year, Steel Media Ltd will run a Big Indie Pitch event at G-STAR 2018 in November.

G-STAR is the hub of Asian game market and so provides an amazing platform for entry into the Asian game market. The event offers visitors an optimum business environment – there's a relatively low participation cost coupled with maximum opportunity for meeting the industry.

It always features the best selection of game companies, from indie developers to the largest firms and in 2018, a focus for G-STAR will be international attendees. National booths and pavilion participants will be strongly welcomed. G-STAR delegations are currently touring Europe, America and Asia to meet potential participants. As well as more booths from representatives around the globe, 2018's G-STAR will also be heavily promoting the indie game scene.

This year’s G-STAR takes place on November 15-18 at BEXCO, Busan, and has a variety of programmes for B2B and B2C participants such as the Korean game award, a welcome reception, an indie promotion booth, games industry conference G-Con, an investment market and a job market as well as the Big Indie Pitch and Big Indie Awards.

Pocket Gamer has a 13-year heritage as the leading mobile gaming brand, with both consumer and trade websites, and a live conference that takes place three times a year in different territories. G-STAR will be a major sponsor at PG Connects events this year; the next event in the series will be Pocket Gamer Connects Helsinki on September 11-12,

New for 2018 will be the spectacular Big Indie Awards, which will take place during G-STAR in South Korea, featuring G-STAR as the lead sponsor. The Big Indie Awards are a chance for all indie developers around the world (including previous Big Indie Pitch winners) to submit a project for global recognition.

An essential stop on the global gaming event calendar

Mr Shin Chul Kang, the chairman of the G-STAR organising committee and of K-Games, the Korean games industry association said: "Our second partnership with Steel Media is part of our effort to expand our relationship with the global gaming industry. Through this cooperation, we’re aiming for the effective, efficient and ongoing promotion of G-STAR. We aim to reach potential G-STAR customers who were not reachable before, minimizing those who are left out, and helping more games industry people globally come to experience G-STAR as an exhibitor, visitor, buyer, or lecturer.”

Mr Chris James, CEO of Steel Media added: “I'm absolutely delighted that Steel Media is involved with G-STAR again this year and to be bringing the Big Indie Awards finale to Busan in November. The show remains the most accessible route into the dominant Asian market - not just Korea but also a strong presence from China and Japan - and deserves to be an essential stop on the global gaming event calendar for developers and publishers alike."

Steve is an award-winning editor and copywriter with 20 years’ experience specialising in consumer technology and video games. He was part of a BAFTA nominated developer studio as project manager for the UK’s first fully interactive digital TV channel. In addition to editing TheVirtualReport.biz, Steve contributes to PocketGamer.biz, PCGamesInsider.biz and BlockchainGamer.biz, as well as creating marketing content for a range of SMEs and agencies.

Find out about key Asia trends from G-STAR, NetEase, Gamevil and iDreamSky at Pocket Gamer Mobile Mixer panel at Gamescom

Quakecon at Home raises over $30,000 for charity