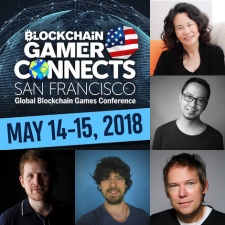 The Blockchain Gamer Connects conference schedule features 40 of the sector’s most notable innovators and entrepreneurs across four tracks entirely dedicated to the most exciting innovation to happen in games since Pong.

Taking place for the first time within Pocket Gamer Connects San Francisco on May 14-15, the seminars cover a wide range of topics to suit every level of interest. Whether you want to monetise your game through cryptocurrency or find out how you could incorporate the technology to find new ways to play, you’ll find it at the show. Book your ticket now!

Here are the latest thought leaders who have confirmed to speak at the event.

Reality Gaming Group’s co-founder, Tony Pearce, is one of the most notable of the new breed of developers leading the charge in using an Initial Coin Offering (ICO) to fund games development - in this case the AR FPS, Reality Clash. The London-based studio more than doubled its original target last August, raising $3m in just 48 hours - now, Pearce will share the secret of his success with you in an essential seminar.

Picking up the same thread, Shirley Lin from Discovery Of Game Innovation (DOGI) will take her place on a panel debate that we know a lot of delegates will put at the top of their list of must-see seminars as she discusses how to use blockchain for crowdfunding.

And don’t miss Dylan Jones, founder of San Francisco’s decentralized marketing platform Refereum, as he shares his insights on the ICO process, highlighting the high level steps, obstacles and solutions that you need to know about.

LA developers Lucid Sight have a track record for pioneering work in emerging technologies such as virtual reality and are now fully focused on blockchain with Cryptibles and Crypto Space Commander. Co-founder and CEO Randy Saaf will speak about why the technology isn't just a fad when it comes to games and detail some of the profound opportunities for disruption.

Beyond gaming, Andrew Carter, CEO and co-founder at Fathom, the data science token economy, takes a broader look at blockchain and how it can be used to empower collaboration.

Kilian Kunst, CEO and co-founder of Berlin-based developers Streamstars UG, will share his experience of developing ‘visionary space journey’, Age of Chains. Kunst will share the lessons learned since starting development of the trading card game in 2016 and the benefits of blockchain integration for any game developer.

With a background in cryptography, few are as well placed as Ulas Bilgenoglu, CEO and co-founder of Turkey’s RadMule Labs, to explain the unique benefits and opportunities of blockchain and what it means for the future of games.

The names keep on coming

And we’re just getting started - check back for more announcements in the coming days and weeks.

If you’re working in the blockchain sector or want to find out more about the tech and how you can integrate it into your games, you need to be at Blockchain Gamer Connects next month. Book now!

Schedule live for Pocket Gamer Connects Helsinki event, check out who is speaking from PC

How To Get Into Pocket Gamer Connects San Francisco FREE!