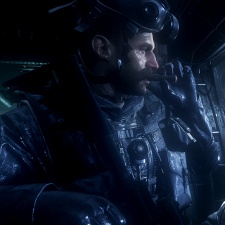 The film is set for release on September 19th and traces the shooter's story from its origins through to its blockbuster success. It was filmed across the UK, Europe and America, and is independent of publisher Activision.

“One of the biggest challenges making the film was encapsulating a 15 year timeline into 93 minutes,” said Beales. “I was very fortunate to work with a lot of great people whose input and contribution really helped make this happen. It’s a rich story of evolution told through the eyes of games developers, fans, industry experts and professional players.

“It’s a big documentary and we wanted to put the fans first so took the opportunity to host two full screenings at DreamHack Atlanta that were a big success.

“It’s been a great 5-year journey and even though the documentary is centered on video games, the story is always about the human input and endeavour involved. The rich experiences of developing games, playing them or waiting in line to buy them will always remain centre stage.”

While this might look like a leftfield decision for Devolver, the company has in fact been publishing films since 2013, when it announced a film division at SXSW. The firm has a number of films already available on Steam.

As for Call of Duty, publisher Activision announced in April that it intended to make a cinematic universe around the franchise.