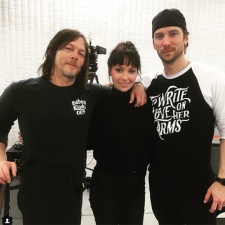 Hideo Kojima's ambitious and trippy Death Stranding has some new faces on its cast.

Video games performance veteran Troy Baker and actor Emily O'Brien have joined Kojima Productions project, according to a post from O'Brien herself on Instagram (below).

Baker is probably one of the foremost performance artists in video games at the moment having worked on the likes of The Last of Us, BioShock Infinite, Far Cry 4, Infamous: Second Son and the Batman: Arkham franchise.

O'Brien meanwhile has worked on projects such as Final Fantasy XIV: A Realm Reborn, Middle-earth: Shadow of Mordor, The Order 1866 and League of Legends as well as Telltale's Guardians of the Galaxy and Batman games.

Death Stranding is the debut game from Metal Gear franchise creator Hideo Kojima with his new Kojima Productions outfit. This follows a sizeable falling out with previous employer Konami that saw him departing the Japanese publisher around the launch of 2015's Metal Gear Solid V: The Phantom Pain.