Byron Atkinson-Jones: 'Developers should go triple-A before they go indie' 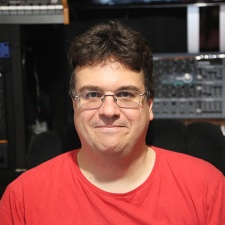 Like many indies, Byron Atkinson-Jones began life in triple-A.

For almost half of his 20-year career, the developer worked at the likes of EA, Lionhead, Kuju, Sega and Introversion before deciding to go it alone.

This was in part due to former Lionhead developer Cliff Harris sending Atkinson-Jones his bank balance after going indie, but also because he didn’t want to look back with 'what ifs'. Though he says he learnt a lot from triple-A, he enjoys the flexibility of being indie.

“Running my own business was always the ambition,” Atkinson-Jones explains.

“Wherever I worked, I wanted to learn something from them. Lionhead was all about learning about creativity and finishing games, though they took far too long to finish games there. I worked at Pom Pom to learn how to make games – the way I work now is directly the result of working with them.

“The difference between triple-A and indie is that at the big companies if you see train crashes about to happen, and you're super low down the ladder, you can't do anything about it. You can scream as much as you like, you can say the game is terrible and that we need to change it but release date is next month and the game isn't going to be playable and it'll tank. There's nothing you can do about it and it's a horrible feeling. Working on a team of 100 people, you aren't going to get listened to. If you run your own business, if you screw up it's on you; if you succeed it's on you. You don't have the excuse of saying you're a member of a team and you did your job, but the game tanked and it's not your fault. It's about taking responsibility. I didn't want to look back in 20 years time and go 'what if?'.“

"Running your own business, if you screw up it's on you; if you succeed it's on you. You don't have the excuse of saying you're a member of a team and you did your job, but the game tanked and it's not your fault. It's about taking responsibility. I didn't want to look back in 20 years time and go 'what if?'.“

Still, working at triple-A is still something Atkinson-Jones would recommend to people just starting out, rather than going it alone – a bit of advice he gives regularly as part of his work as a mentor for developers.

"The stark reality of the industry is that there are successes out there, but they are few and far between," he says.

"With the sheer number of games that launch each day, chances are your first game is not going to be a success, and if you fail what do you do? Brenda Romero was saying at Develop:Brighton that the average lifespan of a developer in the games industry is five years and after that they leave. If you're going to make your indie game and are going to spend two years making that, you only have three years left. If you fail on that first one, you may not make it to that third year. What do you do?

"If you start off your career by working for EA, you're going to learn the ropes and see what developing a game is really like, you're going to learn to work in teams and you may actually like it. The advice is: always go work for someone else first, discover your burning passion, then you can make your own games then make a break.”

On top of the challenges of being indie, Atkinson-Jones says that discovery is a real problem on Steam right now.

“The idea used to be to find a publisher, but publishers don't really do that much more than you can do yourself, speaking purely about money. A publisher can give you money for marketing, but in return you give up either your IP or a huge portion of your IP. 2014's Blast 'Em was released with Mastertronic, but had I taken money for it I would have never seen much money back because it didn't make that much.

"Same with [Atkinson-Jones' upcoming shoot-em-up] Promethium, if I had signed with a publisher they would have taken a large chunk of it and a forward-front costing thing and I'd never see anything beyond that. That's happened to too many developers I know. I did initially talk to publishers about it but I am going to self-publish this one. I've got to learn more about getting the games out there. Promethium is a small game. It came from a friend of mine – he called me up one day and said that Blast 'Em was my most successful title, why hadn't I made a sequel for it – so that's how it came about.”

Asked what his ambition is for the next year, the answer is pretty simple.

“I hope to be surviving. I've managed ten years but if I don't start to make some money soon I'm going to be back at EA again. It's the reality. I hope to still be making my own games in that time, I hope that the big one takes off and we can hire a studio of people.

"I have two dreams; one is to have a studio of people I have hired, try and make games the right way but we'll probably make the same mistakes that everybody makes. The second is I want to be able to fund games, not as a publisher. I want to be able to give loans to people – I want to give money to great-looking games. I don't want to be asking for IP. I'm only here because the industry supported me, so I want to give back. That's why I mentor – I learnt to code from other coders. I do business because I learnt from Cliff Harris.”

It sounds like Atkinson-Jones’ next project will make or break him - but this is something that’s true of all indie releases, he says.

“The reality is every game you make as an indie is your make or break, unless you have huge reserves,” he explains.

“I’ve been pretty open about this, but the only way I've been able to carry on is due to contract work. I've been a game developer for 20 years, so when I do contract work I get paid a lot. That gave me a bank balance to live on for two to three years. That has to stay up due to sales of games and if the games aren't selling fantastically well, that will dwindle. When it gets to zero, why do you do? Do you go work somewhere else, do you do contract work?

“My family is very supportive and understanding, but there are limits to everything. Every business is the same. Lionhead almost collapsed because their games didn't sell too well, so every game was a make or break. If you have a burn rate of £3m a month, you have to sell a lot of games. Every game is a make or break. It's only if you are a massive publisher where that's not true.”

Reply
James Coote
Having gone straight into being an indie from Uni, I don't feel like I've missed out hugely - Just learned different lessons in a different order.

That said, I was super lucky to have the financial means to do so. Getting paid to learn in a bigger company makes a lot of sense otherwise.

Also, I feel like I lack credibility in the eyes of investors from not having done a stint at a larger company. As well, building a network of people to team up with is easier if you've worked together while working for a bigger company.
Posted 3 years, 2 months ago