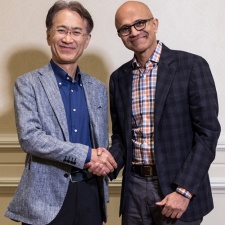 It seems that the team working on PlayStation were blindsided by the news that Sony was teaming up with Microsoft on a new cloud tech deal.

That's according to Bloomberg, which says that the games team at Sony wasn't aware of the deal with the Xbox firm. The collaboration was announced last week - complete with execs Kenichiro Yoshida (right) from Sony and Microsoft's Satya Nadella (far right) shaking hands and smiling.

That the PlayStation division wasn't aware of the forthcoming deal is likely the result of a few things. Firstly, as publicly traded companies, Microsoft and Sony will have had to keep this very close for fear of leaks. Secondly, Sony is a company whose various divisions are notoriously bad at communicating between each other.

The deal has likely been struck in the face of Google revealing its own streaming platform, Stadia, at this year's GDC.

While Sony might have been the first big games player to get into the cloud streaming market, acquiring Gaikai in 2012, the PlayStation firm doesn't have infrastructure on the same scale as Microsoft's Azure network, Google's data centres or Amazon's own Web Services division.